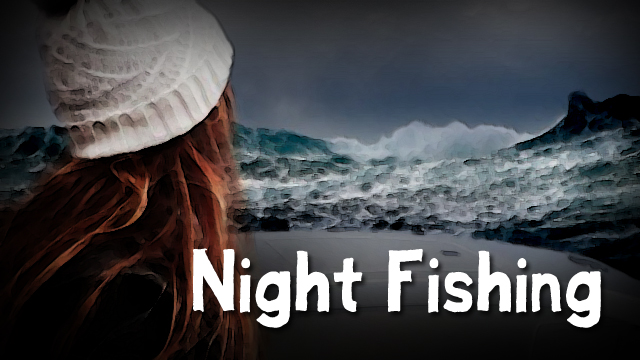 I suppose you have to be a parent to understand what it all means. As children, we all have “safety nets” to keep us from experiencing the world as it really is. But when one becomes a parent, you're always “on watch.”

And the sadness and joy of being that parent shows up every day and just grows and grows – all destined for the ultimate moment when your child will eventually head out into the world you've been protecting her from. Her first unaided steps. The first day on her own at school. Her first solo in a car. In a plane.

It's also a reminder that as one life is accelerating, another – yours – is beginning that long, long deceleration.

So this little moment, Night Fishing, is meant to scoop up all of those feelings and dump them boldly onto its audience.

In the opening narrative of a feature film I wrote a while back, the main character says, in part, “...every journey begins at the end and ends at the beginning...”

So in Night Fishing we meet an adult daughter about to attempt to row a boat alone across the Atlantic Ocean – from Maine to Ireland – and she's in the process of saying goodbye to her mother who has come to see her off in the wee hours of a foggy coastal morning.

We're not informed of the scope of the voyage until the very end, in keeping with the not uncommon “punch line” ending of short films.

The moment is not unlike the first day of school where her mom had no choice but to let her daughter go. Of course, this isn't that. In fact, it is more likely MARKIE, the daughter, will not survive the journey. It's interesting to note that in the early 1700s the odds of a passenger surviving a trans-ocean voyage were less than 50%.

The film's story progresses with the clear conflict over the need to break loose being in a constant battle with the desire to stay connected.

The particular moment expressed in Night Fishing is a personal one, as I vividly recall the moment at 2:00 a.m. when I took off the last line that tied our 25' sailboat to the dock in Rhode Island and my wife and I headed into the open ocean toward Bermuda in her.

(NOTE: Please 'Google' my name for more about me.)