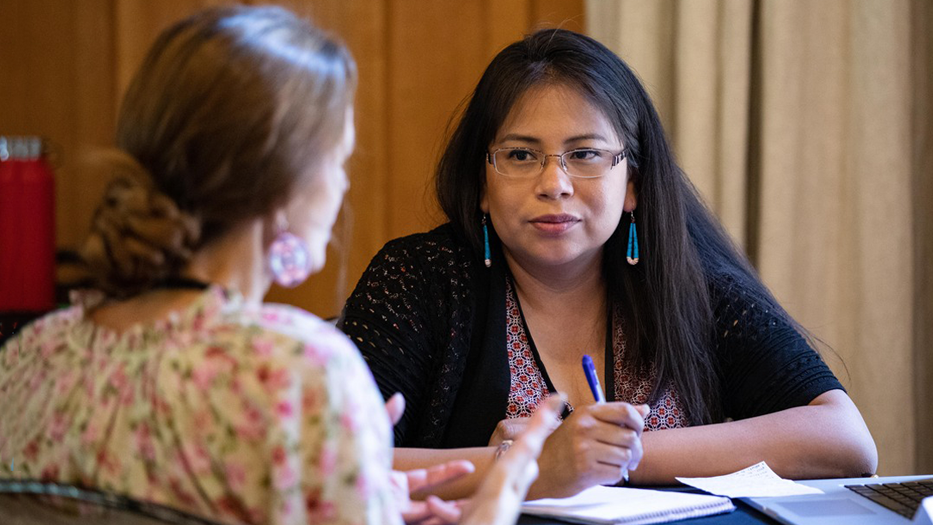 A young woman interviews for a job she desperately needs, but there's only one person standing in the way of her getting it: herself.

Why Me? by Matthew Yongue

It's the opportunity of a lifetime. The stakes are high as your main character is mere moments away from interviewing for their dream job. Your character is nervous, but excited. Landing this job will change their lives for the better and they've spent hours preparing for this big moment. After all, first impressions are everything. Your character is seated in an office when there's a knock on the door and the hiring manager enters. Your character's stomach drops, recognizing the person. Write the scene that picks up from this moment. Who is this person and what is their relationship to the main character? More importantly, what is their conflict? And how does the interview go? Your final written submission can be in any genre and should be no more than 10 pages.

If you have questions regarding the challenge, please email collab@sundance.org. Please do not contact members of the jury directly.

Laurel Parmet
Juror
Laurel Parmet is a screenwriter and director based in New York, where she received her MFA in directing from NYU's Tisch School of the Arts. Her award-winning short films, including SPRING and KIRA BURNING, have played at SXSW, MoMA, Palm Springs, Outfest and more. She is a Sundance Screenwriters Intensive fellow with her feature THE STARLING GIRL and is developing a feature with Alexa Demie and Bron Studios. more...
Imran Siddiquee
Juror
Imran Siddiquee is a writer, filmmaker, and speaker challenging systems of domination. Their writing on white supremacy, patriarchy, and popular media has been published by The Atlantic, Bitch Magazine, Buzzfeed, Literary Hub, Longreads, and others. They are the Communications Director for BlackStar Projects, home of the BlackStar Film Festival. more...
Meedo

Juror
middlebury, Vermont, United States
Ioana was born and raised in Romania, where she lived through a communist dictatorship and a traumatic socio-economic transition before becoming an immigrant to the US. She is an alumna of the Cannes Cinefondation Residency, the Sundance Screenwriting and Directing labs, and the Torino Film Lab. Her work as a director has been part of the official selections at the Cannes, Berlin, Sundance, Tribeca, and AFI international film festivals.