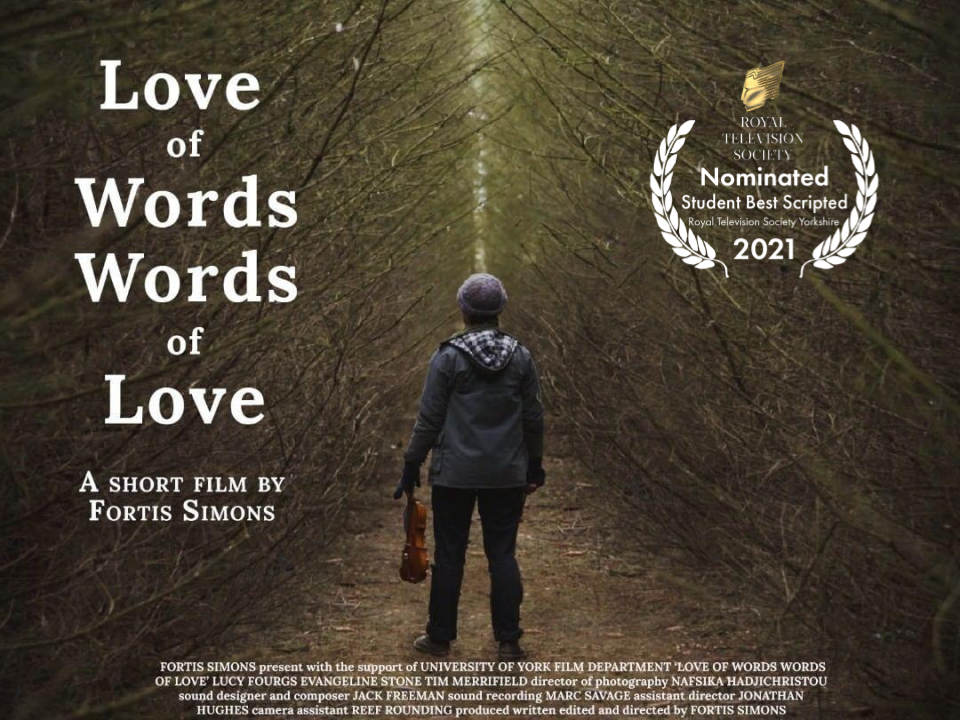 In a world where you pay for the words you speak, Eden, a young violinist with only a handful of words to her name, seeks to fulfil her sister’s final wish.

‘Love of Words Words of Love’ is an intimate portrayal of sisterhood’s silent courage; a poetic exploration of our current delicate relationships with language, silence and artistic forms of communication.

FS
Fortis Simons
Creator
Fortis is a London-based writer, director and poet in his final year at the University of York studying Film and Television. He is interested in the delicate relationship between poetry and visual storytelling. In his experimental short ‘Millenials’ (2019) he explored the manifestations of this fusion, touching on issues concerning today’s youth, from addiction to self-expression. Millennials was selected by experimental film festivals, notably the Chicago International Arthouse Film Festival. Fortis continued this exploration with his first narrative short ‘Love of Words Words of Love’. An intimate portrayal of sisterhood’s silent courage and a poetic exploration of our current relationships with language, silence and artistic forms of communication. It was nominated at the Royal Television Society Student Awards Yorkshire 2021 for ‘Best Scripted’. Fortis currently runs a weekly film review show ‘Screen’ on URY and hosts a series of radio interviews: ‘In Conversation with’ Award winning film industry professionals (incl. Bafta, Academy Award and MTV nominated). He has also organized and curated a TEDx event themed ‘Through The Lens’, which explored the use of different perspectives to find creative solutions to big issues.