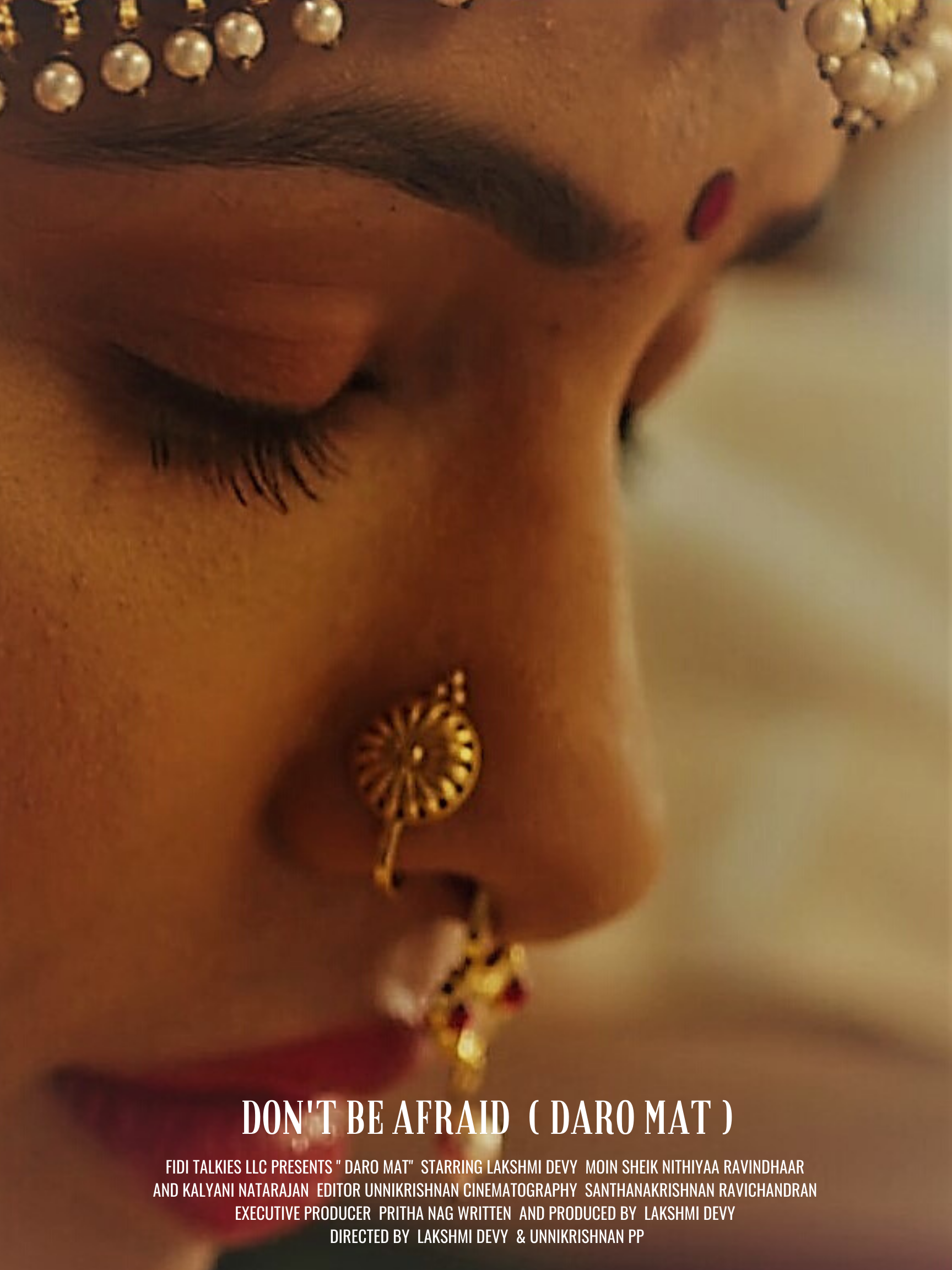 Don’t be Afraid (Daro Mat) revolves around the less spoken about Indian Girl. The Indian girl who is smart and yet devoid of opinions as ' having an opinion' was never an option. The movie depicts her strength portrayed by simple thoughts. How she navigates her life through cultural barriers forms the crux of the story. Lakshmi Devy who is also the filmmaker , portrays the role of Divya with poignant restriction and vulnerability.

Lakshmi devy
Creator
New York, NY, USA
Born in New York, Lakshmi Devy is an Actress, Director, Screenwriter and Producer of Indian descent. She shuttles between New York and India and is well tuned to both cultures. From an early age, Lakshmi expressed an artistic talent and passion for the performing arts. She is a trained classical Bharathanatyam dancer. Her mother, a successful doctor and father, a well-known travelogue writer and published author, were keen for her to choose a more traditional, less "frivolous" career path. While studying medicine, she continued to dance, and work in theatre, and eventually on graduating medical school, Lakshmi realized that all she wanted to pursue, was acting. Her life took a turn when she was spotted shopping at a mall by a fashion choreographer. He offered Lakshmi a modeling job for a print advertisement, and thus starting her modeling career and love for the camera. From stage to screen, Lakshmi decided to hone her craft and attended The Mindscreen Film Institute in Chennai, India as well as The Actor Prepares acting school in Mumbai. She has since worked on close to 100 print campaigns and both local and national TV commercials. With a successful modeling career underway, Lakshmi left her lucrative career in medicine and became a full-time actor. Her first, of many film roles in India, was the Anand Chakravarthy directed drama 'Nil Gavani Sellathey'. She later starred in numerous South Indian movies, in three distinct local languages of Tamil, Telugu and Malayalam, including 'Shivani', 'Cinema Company' and 'Masala Padam', which was also her original screenplay debut. In 2016, Lakshmi made a permanent move to New York receiving rave reviews from some of the entertainment industry's leading casting directors. She began training with Peter Meiner at the renowned T. Schrieber Studio and took improv. classes at Upright Citizens Brigade (UCB) in New York City. Since arriving to New York, Lakshmi has appeared in several national commercials and print campaigns, including Google 360, Kraft & Heinz and whiskey brand Johnnie Walker , Morphe Cosmetics, The One world Observatory ,to name a few. This actress filmmaker's last Film "Daro Mat - Don't Be afraid" was screened at film festivals across the world and now is available on youtube with close to 3 million views. In addition to acting, writing and producing, Lakshmi loves to travel and explore new realms. She is an advanced scuba diver, having taken her scuba license in the Maldives and the Andaman Nicobar Islands. Throughout her young life, Lakshmi's parents exposed her to the many wondrous corners of the world, and its cultures, a tradition she proudly, and often spontaneously, continues today. more...
Tags:Activism & Social Impact Shorts