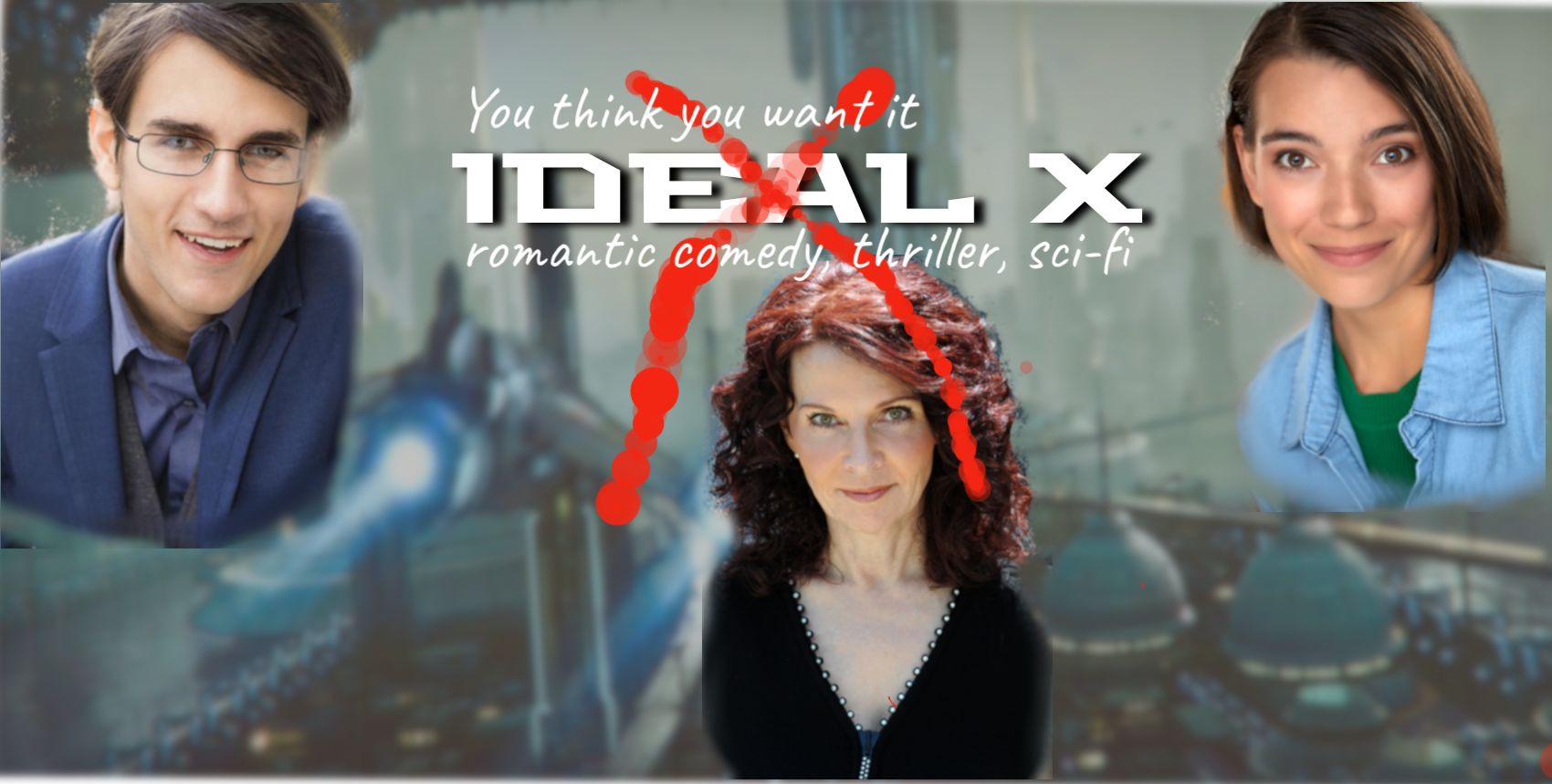 This is the screenplay of a feature film (102 pages) in its final stages.

Logline: The Woman and Man want to be together, but love between people is illegal because everyone is married to a perfect biorobot.

And it so happens, that the spouse of the woman looks like that man and vice versa.
They help each other to run way and hide with their spouses-biorobots
from the corporation, which pursues them to replace their robots with more perfect copies.
The keeping together for a long time leads to conflict with their spouses.
But in vain. They themselves understand that they can’t be together, because they are not perfect.

Idea: We all love two persons at the same time.
One is the real one.
The second one is the ideal, a product of our love.
And we will never, never, never choose!

The story of the protagonists (the woman and man), is composed of their repeated repulsion and attraction. The obstacles - their spouses-biorobots maintain the status quo because they are programmed to love these humans.

It seems, there are three big problems in the script.

Problem #1: The Protagonists (humans) don't act. No action, no story.
But:
- maybe, this repulsion and attraction yet, are the actions;
- the plot is held on the story of their persecution by the corporation;
- acts #2, #3 and #4 are based on three stories of the supporting characters.
- the story is supported by the arch of the antagonist, who wants to make happy all human race, but turns into a “monster”.

Problem #2: Due to the fact the woman and man don’t act, they are not iconic enough.
They are just cute nerds, especially in comparison with logical and high intellectual robots. Who wants to follow pathetic failed ones?!
But:
- we all are pathetic failed ones in our feelings towards our loved one!! Let's have a few laughs at ourselves!
- we have the iconic antagonist here.

Problem #3: The climax is solved by the robots, that is the obstacle. So, the cause of the conflicts themselves solves both of these conflicts: and love triangles and prosecution of the corporation. But it is «Deus ex machina», isn't it?

All this sounds like the dude doesn't want to get done his job nor on the establishment of an iconic and acting protagonist or on creating a structure that works. LOL!

Grigory Bolotnikov
Writer/Director
Moscow, Russia
EXPERIENCE (2005 - 2008): Educational films for small children and their parents (17 DVD titles) including of 2 titles of films with animated characters and actors. * director; * editing, animation and digital effects, (Final Cut, Photoshop); * producer (since 2010): screenwriter screenplays of full length feature films: «GREEN OAK TREE IN LUKOMORYE» 100% operational fairy tale which is based on the russian folk tales (not shooted yet because of its high cost) «DAY OF GHOSTS» 100% operational It is also a fairy tale story (but inexpensive). It is based on real teenage problems. «MERCY» 80% «SYSTEM REBOOT» 15% «GREEN OAK TREE IN LUKOMORYE 2» 10% EDICATION: * 2010–2014: Alexander Mitta's Film School (Moscow, www.mitta.ru) * 2010–2014: the workshops in Moscow of John Truby, Mark W. Travis, Neil Landau, Richard Krevolin, July Selbo, Isaac Kerlow, and also the workshops of the experts from Russia. PREVIOUS OCCUPATION: 1987–2004: I devoted myself to working in the area of the development of compositions of the nano- coatings and the equipment for the coatings deposition. (8 inventions, 2 monographs, PhD and so on). 1993-2004: Production of the nano-coatings and the equipment for the coatings deposition (CEO, co- founder of the company «VPT (vacuum-plasma technologies)» Russia, Moscow).
Tags:ComedyRomanceScience-Fiction