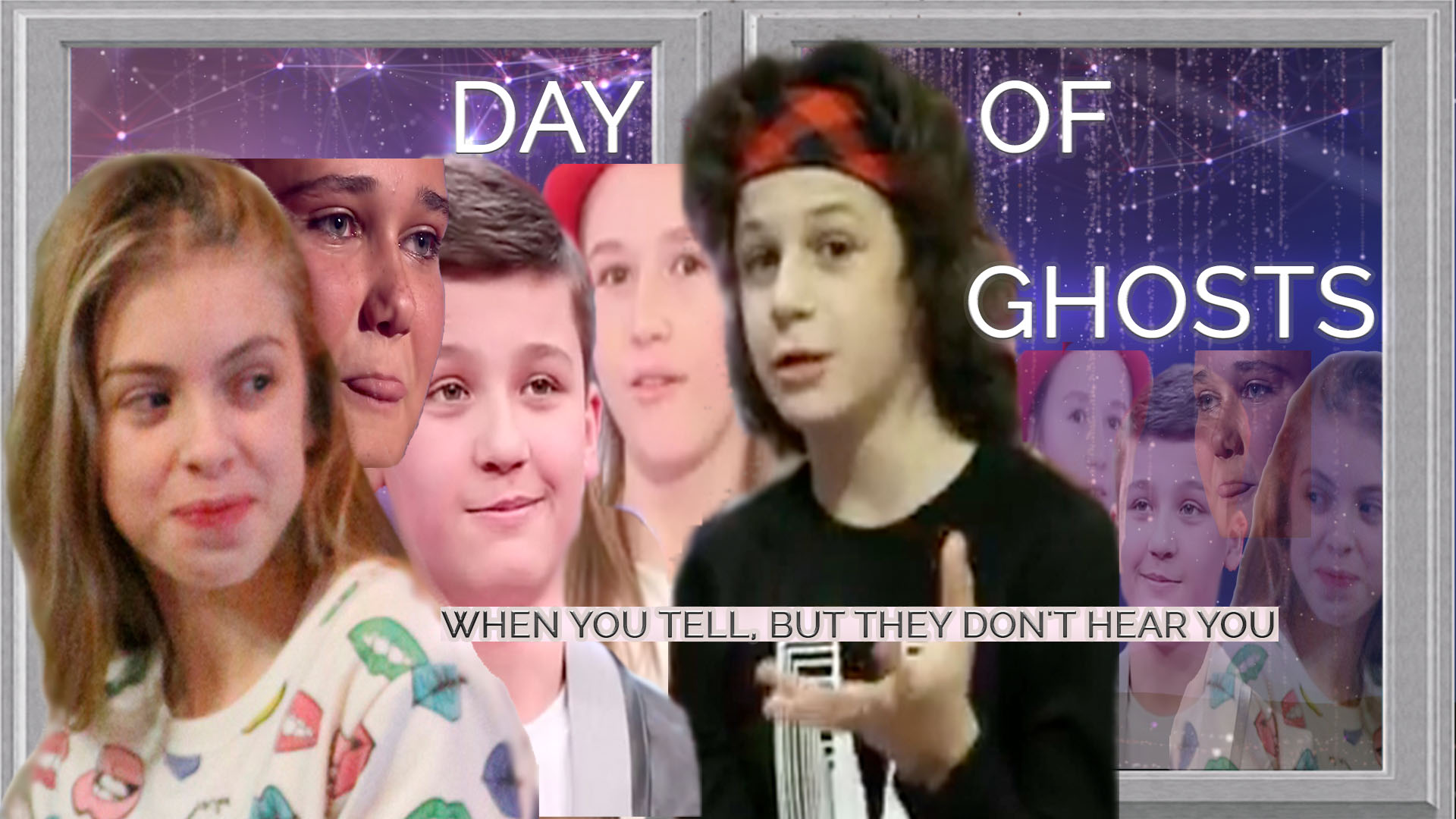 Sizzle reel - teaser, 1 min: https://cloud.mail.ru/public/Cw5L/HLGwRLuna
Casting, teens (video, 1 min): https://cloud.mail.ru/public/8iSz/JkYd9zuEg
ABOUT MY DIFFICULTIES:
1. I lost the protagonist in the third quarter of the screenplay. Do I need to do something with it?
2. Perhaps one of the young people will estimate how correctly the life of modern teens is shown.
3. The screenplay is mostly talking. That type of film has two type of difficulties:
- don’t express the main idea by dialogues;
- to keep an audience involved in the story during the whole screenplay?
Did I manage it this time? Or what do I do about it?

ANNOTATION:
Making excuse and blaming each other for the suicide attempt of a classmate, teenagers investigate the causes of the tragedy. How hard they want to revert that all! And now one proposal doesn’t seem like another prank.

It's a story about growing up difficulties.

PLOT LINES:
Main plot A:
- The schoolboy meets with a girl secretly because their classmates consider her to be ugly. SHE suffers from classmates’ ridicules.
-The protagonist and his friends are discussing which of them is to blame for the fact that SHE fell from an unfinished building and is in a coma;
- The protagonist sees in a dream his deceased grandfather which promises to bring their classmate out of the coma by altering the past;
- They want to revert that all so hard that the proposal doesn’t seem like a prank.
- But since the past will altered before the protagonist and his friends were born, they might disappear;
- The protagonist tries to convince his friends to risk their lives (DILEMMA).

"TICKING CLOCKS":
Either the protagonist changes everything today, or he will become a laughing stock in the class because he didn't prevent his girlfriend from being ridiculed by others.

Secondary plots B2:
Can the friends solve the array of typical teen’s problems and psychological dramas alongside with solving the DILEMMA?

Secondary plot C:
- The protagonist needs to communicate with his father, who now lives separately, but he has fallen out with his dad;
- What conditions did grandfather lay down for the protagonist in exchange for his help?

STORYLINES LOGLINES AND REFERENCES TO THEM:
- The schoolboy meets with a girl secretly because their classmates consider her to be ugly. This triggers the story.
Reference: melodrama about lovers separated by society - «Romeo and Juliet».
- Teens discuss their problems and confrontation with the adult world. What will change in their life?
Reference: psychological drama «The Breakfast Club».
- Will the antagonist (the girlfriend of the protagonist) be able to awaken his love again while the rival is in a coma?
Reference: a comedy about ghosts and the afterlife - «Beetle Juice».
- About ghosts' ability to kid people.

WHAT LIFE LESSONS DOES THE PROTAGONIST LEARN?
Some of the typical teen problems and psychological dramas were solved.

HOW IS THE PROTAGONIST’S ABOVE-MENTIONED FLAW OVERCOME?
- He overcomes his fear of ridicule.

Kate falls from the roof and falls into a coma. Her friends-classmates consider she tried to commit suicide because of classmates ridicule her. Lera (antagonist) wants to get back together with Vitaly (protagonist) until Kate is in a coma.
Vitaly likes both girls. But he is embarrassed about his relationship with Katie because their classmates consider she is ugly. For these reasons, he didn't prevent her from being ridiculed by others.
Now Vitaly needs to redeem himself in the eyes of his friends and Lera, or tomorrow in the class he will be a laughing stock.

In the dream, Vitaly sees his deceased grandfather which promises to bring Kate out of the coma by altering the past. However, grandpa warns that since the past will altered before Vitaly and his friends were born, they might disappear. Grandpa demands that they all agree to it.
Vitaly tries to convince his friends to risk their lives. But they don’t believe the liar and the fan of pranks.
The mutual accusations help them to understand that each of them is to blame for what happened to Kate. This discussion brings the friends together. But they are afraid of risking their lives, and on top of that Lera (antagonist) has the chance to get back with Vitaly.

Act 3: Plan B; new sides to the characters involved in the plan; new friend (psychic)
almost solves the case, but bad guys get in his way.

Vitaly puts himself into a lethargic sleep. A psychic, invited to save Kate, begins the process of returning the lovers to life. The hospital doctor tries to prevent him, as this can interfere with traditional treatment.
During the preliminary session, the psychic helps the friends to understand finally the causes of the tragedy and its culprits.
The doctor calls the policemen who order the psychic to leave. They deem the actions of Vitaly's friends as a cause of Kate’s suicide.

Act 4: Solving the dilemma; everything is lost; obligatory scene: The protagonist boasts in class about his relationship with Kate, and his lies help him to change the attitude of the class towards her.

Now the friends agree to the conditions laid down by the ghost, as the only way to save themselves from being responsible for the crime. But the ghost pranked them. He can't alter the past. He didn't think that they can agree. Now Vitaly has to get out of the lethargic sleep and to take action.
The policemen are delighted with the willingness of the friends to risk their lives for the sake of their classmate. They don't report a crime.
Vitaly's desire to bring Kate out of the coma by talking to her. It captivates not only his friends but the whole class. They all go to the hospital to congratulate her on the birthday. They arrange for someone to be with her all the times. In several months Kate comes out of the coma, but Lera (antagonist) has already got back together with Vitaly.
Vitaly reconciles with his father. Grandfather lay down those conditions for the Vitaly in exchange for his help.

Grigory Bolotnikov
Creator
Moscow, Russia
EXPERIENCE (2005 - 2008): Educational films for small children and their parents (17 DVD titles) including of 2 titles of films with animated characters and actors. * director; * editing, animation and digital effects, (Final Cut, Photoshop); * producer (since 2010): screenwriter screenplays of full length feature films: «GREEN OAK TREE IN LUKOMORYE» 100% operational fairy tale which is based on the russian folk tales (not shooted yet because of its high cost) «DAY OF GHOSTS» 100% operational It is also a fairy tale story (but inexpensive). It is based on real teenage problems. «MERCY» 80% «SYSTEM REBOOT» 15% «GREEN OAK TREE IN LUKOMORYE 2» 10% EDICATION: * 2010–2014: Alexander Mitta's Film School (Moscow, www.mitta.ru) * 2010–2014: the workshops in Moscow of John Truby, Mark W. Travis, Neil Landau, Richard Krevolin, July Selbo, Isaac Kerlow, and also the workshops of the experts from Russia. PREVIOUS OCCUPATION: 1987–2004: I devoted myself to working in the area of the development of compositions of the nano- coatings and the equipment for the coatings deposition. (8 inventions, 2 monographs, PhD and so on). 1993-2004: Production of the nano-coatings and the equipment for the coatings deposition (CEO, co- founder of the company «VPT (vacuum-plasma technologies)» Russia, Moscow).

Love in the Time of Robots